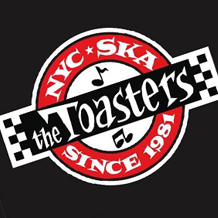 NYC SKA LEGENDS EMBARK ON 30TH ANNIVERSARY TOUR
Bands may come and bands may go, but the Toasters Tour goes on forever!

Thirty years ago a bunch of upstarts ignited a spark on the Lower East Side of Manhattan. A spark that fired the imagination of the American music scene, causing a global conflagration. That music was Ska and the band was THE TOASTERS. The 2-Tone sound re-created in their own image by this unruly group of ruffians synthesized the classic 70?s British sound with east side Punk and rock and is now regarded as being the precursor to the Third Wave of Ska. The embers of the legacy bequeathed by The Specials, The Selecter, The Beat and Madness were rekindled and the Toasters hit the road. Hard.

Five-thousand some gigs later the sparks are still flying and the band is ready to pick up the cudgels once again for their 2011 30th Anniversary tour. Some of the faces may be different but, of course, the song remains the same. The distinctive Toasters sound has recently been hallmarked as one of CBGB's 20 core bands (Clear Channel Radio) and nothing could make the band prouder than being ranked up there with personal heroes The Ramones.

It?s important not to forget where you came from. Lots of bands do that but not the Toasters!

The band is heading Down Under for a national tour this September starting in Adelaide and finishing up on the sunny Gold Coast.