Californian kings of dirty Reggae The Aggrolites will hit the road across Australiay for the first time in close to a decade!
After a long recording hiatus, their latest album “Reggae Now!” was laid down in one day in 2018, and released in July 2019.

‘The Aggrolites have stretched out, and gotten it even more right, at exactly the right time,’ says Lynval Golding, vocalist/guitarist for Two-Tone legends the Specials. ‘This is THE album.’

The Aggrolites front-man Jesse Wagner had this to say about the album:
“We wanted to keep it real,” Wagner says. “Even though we were proud of [2009 album] IV, we know we went outside the box a little on that one. This time around, we decided to keep it natural: Simple, two-chord reggae. It’s feel-good music. We know what people like out of us. Let’s just be us.”

Expect to hear much-loved hits + new material from these Veterans of the so-Cal ska punk scene when they come to Brisbane, Sydney, Adelaide, Melbourne & Perth.

Imagine a band of southern Californians who play a brand of rocksteady reggae and ska that sounds like Wilson Pickett throwing a house party backed by the Meters and the Maytals and you get an idea of the gritty dirty soulful reggae sounds of THE AGGROLITES! Route 66 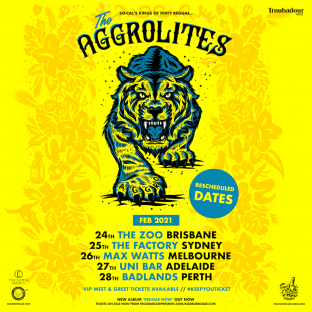