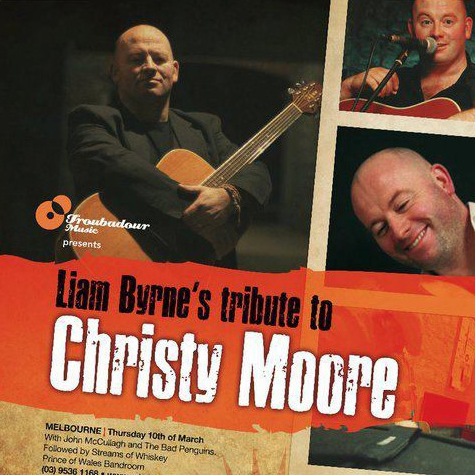 If you hadn't seen the word "Tribute" on the posters outside the venue you?d swear it was the man himself! He has the look, the voice, the guitar, the eyes, the black vest, the songs, the humor, the stories, the bodhran, the intensity of the singing, coupled with the fury of the strumming, mother of God he even sweats like him! And the hair is none too plentiful either!

Wexford native Liam Byrne, has been performing his show Ordinary Man a Tribute to Christy Moore 2001. It all began in the Bridge Tavern in Wicklow town and since then Liam has been criss crossing Ireland, performing to thousands of people of venues both large and small, playing all the hits from Nancy Spain and Ride On to the hilarious Joxer goes to Stuttgart, Delirium Tremens, and The Honda 50. This is a full concert clocking in at over 2 hours every night.

Christy fans take not however, Liam doesn't stick religiously to the songs of the Kildare troubadour and during most shows he can be heard perform self penned numbers such as Christy's Black Vest (preceded by a hilarious story of how Liam and Christy went shopping in Cork for the aforementioned garment!), Roy Keanes Dog (this one just has to be heard) Living in a field in Avoca (a parody of Ricky Martins hit living La Vida Loca which Liam claims strongly resembles his tune which was penned first!) and the ever popular The Ballad Of Miriam O'Callaghan. On top of all this one of Christy's most popular songs Lisdoonvarna gets a make over most nights and you could hear anything from Joe Dolan's Good Looking Woman to a RiRa Medley featuring I'll Tell Me Ma/Strawberry Beds/The Rattlin' Bog/The Irish Rover.

Liam Byrne has an ability that not many artists have these days namely the ability to hold his audiences attention for the duration of the concert and have them looking for more and more! Hilarious stories of childhood romance, teenage discos, Irish weddings and macaroon bars intertwine with the songs, some new and some old and some that have passed into music legend . He can have you singing Joxer at the top of your voice one minute and then bring an audience to silence with his version of Black is the Colour which leaves the hair standing on the back of your neck!