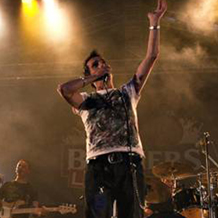 Troubadour Music is proud to present ASLAN, returning to Australia this December after a sell-out tour in 2010.

Aslan, who took their name from the heroic lion in C.S. Lewis’s series of books chronicling the fictional land of Narnia, (Aslan is the Turkish for ‘Lion’), emerged from the working class areas of Finglas and Ballymun in Dublin’s Northside, in the mid 1980s.

The band has released five studio albums to date, many of which have shot to number 1 on the Irish music charts. Aslan endured a 5-year break between 1988 and 1993 after the band imploded, torn apart by overindulgence of all kinds. 5 years and a day to the last time they gigged together, they played a charity in Finglas which ended up reigniting the spark and landing them a record deal with BMG. The past 18 years have been spent touring and playing sold out shows in their home country and venues such as the 9000 capacity Point Theatre, Irelands largest indoor venue.

2011 sees the band working on a new studio album and as they?re 30 years together next year, they're in the process of making a documentary on the story of Aslan from 1982, up to present day.

This December will see Aslan embark on an Australian tour of Brisbane, Sydney, Melbourne and Perth. Tickets are on sale now.